1/2/13 – The Release of Django proves to be Violent, Gory and Bloody Marvellous!

Last week, I decided to watch Django and I was amazed by the cinematography, the visual effects and the acting; Django is by far the best film I have seen this year. As soon as I heard that Quentin Tarantino directed Django, I knew I was going to watch a decent film with lots of blood, violence and gore, although the film was far better than what I was expecting. The anticipation was so intense I have bitten all my fingernails, I actually walked out of the cinema wondering what had actually happened to my fingernails. 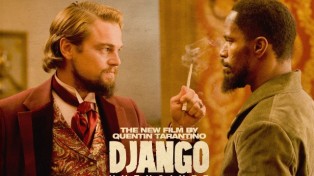 Ok so I wont spill too much information about the film because Django is definitely worth seeing, especially if you are a Quentin Tarantino fan like myself. Jamie Foxx acts a the main protagonist Django, a young American American who is subjected to torture and slavery in the United States during the Civil War. Django is then set free by a German Bountry Hunter who both partake in a long and gruelling journey in order to save Django’s wife from her unscrupulous owners. The theatricality does add an artistic element to the film, even the blood splatters remind me of a Jackson Pollock painting. The violence and the gore does feature a very theatrical effect; instead of watching someone being shot in the chest, you begin to witness the blood splattering in different directions. These particular elements do add an interesting effect to the overall film.

Leonardo DiCaprio also starred in Django as Calvin Candie, the charming yet ruthless owner of Candyland. Throughout the film, the viewer begins to discover that Candyland is a large mansion that contains most of Candie’s slaves, including Stephan who does add a humorous twist to the film. Samuel L Jackson acts as Stephan who is determined to uncover Django’s main reason for visiting the mansion.  The most powerful scene within the film, is the part where Mr.Candie begins to suspect that his two visitors have travelled to the mansion in order to save Django’s wife. Candie places the skull onto the dinner table and begins to discuss phrenology to his guests. The scene does add a level of anticipation as Candie begins to discuss certain parts of the human skull that are associated with submissiveness and creativity. The way Candie places the skull onto the table reminds me of Shakespeare’s, Hamlet; the scene was quite poetic in a way. The juxtaposition between the skull, the old fashioned furniture and the candles also reminds me of the Momento Mori, a 15th century art style that was used as a reminder of life and death.

Of course you can’t walk out of a Tarantino film without seeing lots of blood splattering all over the place; the theatricality is what makes this film so entertaining to watch. When I had first discovered that Django was a Western film, I had my doubts, although the acting and the cinematography were spectacular! The visual effects do add a stylised effect that will have you on the edge of your seat from the very beginning right to the end of the film. If you do enjoy violent films and if you are a Tarantino fan, then you will enjoy Django.

Did you know that Django has won several awards for best picture and best director? This is a good reason to watch Tarantino’s, Django.

For more information please click on the links below.