In the previous post, I discussed my infatuation with Shadows of the Damned, an artistic and eclectic video game produced by Suda 51. Last year, a friend introduced me to another game from Suda 51 also known as Lollipop Chainsaw that features comedy, satire and violence all blended into one. When I played Lollipop Chainsaw for the very first time, I wasn’t entirely sure what on earth was going on so I decided to purchase the game outright and I was instantly attracted to the outlandish storyline, the over saturated colours and the stylised visual effects.

According to IGN, Warner Brothers Studios, Interactive Entertainment and Kadokawa Games published Lollipop Chainsaw in 2012 in conjunction with Grasshopper Manufacture who developed the overall game. Evan Narcisse explains that Suda 51 collaborated with James Gunn, an American ‘Hollywood director’ who created the script for Lollipop Chainsaw. This is quite interesting, as the game appears similar to Japanese Anime, especially the main character who hunts zombies in a range of revealing outfits.

The game begins with a high school cheerleader named Juliet who must attack an army of malicious zombies and demons in order to defeat a vindictive, conniving Goth named Swan. The character brutally kills her opponents with a chainsaw along with a range of cheerleading combinations; the dance moves are used to stun the zombies and the game allows the player to upgrade the existing combinations. 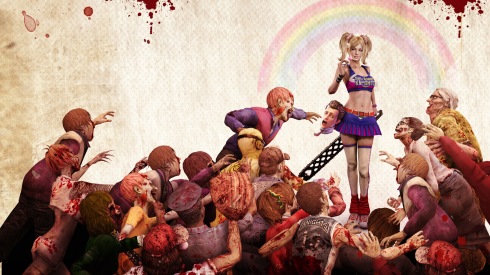 Juliet Starling and her boyfriend Nick

Juliet is accompanied by her beloved boyfriend named Nick whose head is decapitated at the very beginning of the game when he is bitten by a zombie. Nick discovers Juliet’s hidden secrets including her ability to conduct ‘magic rituals’ on his decapitated head; this is meant to save Nick from turning into a brainless zombie. Juliet attaches her boyfriend’s ‘severed head’ onto the side of her belt and together they travel through a dark, psychedelic universe filled with sparkles, blood and delicious lollipops.

These multicoloured lollipops provide Juliet with additional health and energy that become vitally important within the last two levels. I actually realised that there are skulls throughout the game, the lollipop wrappers feature a skull at the very top and logo on the main screen features a skull with blonde hair and two pink lollipops for crossbones.

The third level also contains a boss known as Josey who flies a spaceship wearing a diaper, a pink fury jacket and a top hat filled with miniature skulls. His facial features similarities to a human skull or the Mexican Day of the Dead, I have noticed that Suda’s games refer to certain elements that explore sex, death and immortality. The skull in particular appears to be a popular symbol within Lollipop Chainsaw, as well as other games produced by Suda 51 including Shadows of the Damned.

Josey – The Boss in the Third Level

Throughout Lollipop Chainsaw, the narrative becomes very random and spontaneous, however this is the most entertaining aspect of the game. One minute, you’re playing zombie baseball and the next you’re character is hallucinating on magic mushrooms and you’re fighting a robotic, three headed chicken, you never really know what is about to happen next.

While the visual aesthetics are creative and highly decadent, the actual game play or the controls can be rather slow at times. This particular flaw becomes rather frustrating, as Juliet often takes a while to respond when she is knocked to the ground by another demon or zombie.

Lollipop Chainsaw also features a series of mini games including zombie basketball and zombie baseball, while the concept is imaginative, the auto focus is quite difficult to control. Trying to play this particular mini game was extremely exasperating as Juliet’s ‘chainsaw blaster’ will only focus on the closest zombie. Patience and persistence is the only way to really progress to the next level, however this is only a small section of the game.

On the other hand, I don’t really understand how the zombie baseball relates to the actual narrative or the overall concept; at times I thought the mini games were unnecessary. While the baseball was incredibly annoying, this particular section didn’t ruin my overall experience of the game, as I thoroughly enjoy watching the eccentric storyline and the random interactions between the characters.

Juliet’s suggestive poses and over sexualised clothing is rather creepy at times, especially when the player is able to view up her own skirt. The demons / zombies also insult Juliet with sexist or defamatory comments, however these elements are often balanced with a strong level of humour, irony and satire. It’s almost impossible to take this game seriously, there’s Juliet Starling who has a decapitated head as a boyfriend along with a bright pink chainsaw covered in love hearts.

Achieving a high score is another objective that allows the player to unlock a range of provocative outfits including a seashell bikini, a pink jumpsuit or a sex maid’s costume etc. There are plenty to choose from, however I was purely interested in the actual storyline, as well as the quirky dialogue between Nick and Juliet.

Lollipop Chainsaw only lasted for about six hours, although I often try to imagine what else the producers / developers could possibly squeeze into this dynamic, action packed zombie slasher game. The actual duration worked perfectly with the narrative as well as the vibrant, multicoloured landscape, anything more than six hours would become highly repetitive.

I’m quite new to video games at the moment; playing Dark Souls or the Last of Us is way out of the question right now. While Lollipop Chainsaw is rather complex at times, the game itself isn’t overly difficult to complete. If you are a beginner and you’re looking for something that is creative, visually entertaining and violent, then I would recommend Lollipop Chainsaw!

I could write about Lollipop Chainsaw for hours, there are so many different elements to explore including the audio effects, the soundtrack as well as the ‘pop culture references.’ Stay tuned for the second review for Lollipop Chainsaw! 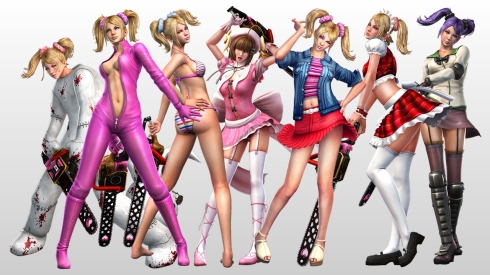 P.S If you are interested in this particular game, I would recommend viewing Angry Joe’s review on YouTube.

One response to “Lollipop Chainsaw Part I: Violent, Outrageous and Hysterical!”